‘The Dream of Peace’, a giant mural by the Norwegian painter, pacifist and peace activist, Henrik Sørensen, adorns the great events hall of the UN library. Given to the League of Nations amidst the dark days of World War II, the mural depicts, as Sørensen himself put it, an ‘ascending sunrise for the human race.’ It represents a beacon of hope in times of despair. However, Sørensen’s name and work have not been fully recognised. Indeed, there have been uncertainties around the story behind the mural and its ‘real’ title, and - despite having been displayed at the UN for almost 80 years – the mural did not have an accompanying plaque with a title and artist.

The Permanent Mission of Norway to the United Nations and the UN Library invited the Geneva community to a panel discussion to remember and reflect on the life and work of Sørensen as a promoter of peace, and as an inspiration for Norway’s peace and reconciliation efforts. The panel consisted of Mr. Svein Olav Hoff and Ms. Torild Skard. 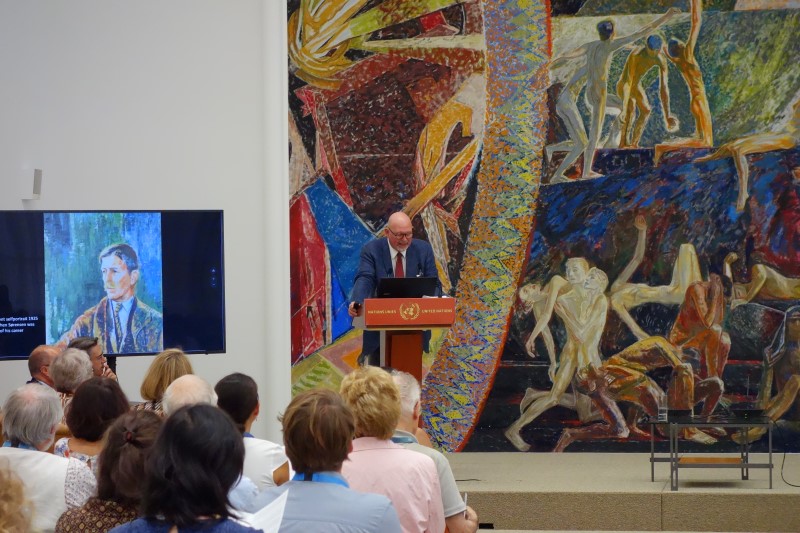 Hoff, a renowned art historian and one of the foremost experts on the work of Sørensen, led the audience through a colorful presentation of Sørensen’s life as an artist and activist. Skard, who is a social scientist, writer, former MP and high-ranking UN official, and a family friend of Sørensen, gave a personal testimony of the mural and her relationship to the artist. 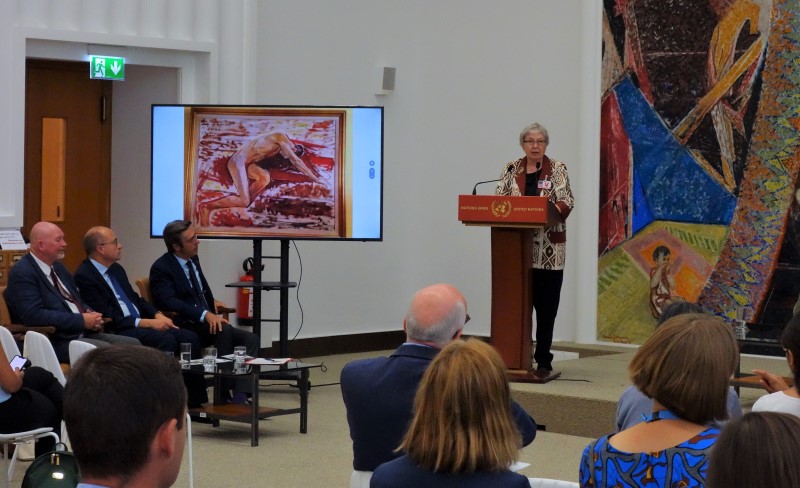 Together, Hoff and Skard painted a vivid image of Sørensen and captivated the audience with their engaged and hitherto unknown stories about the artist, his life, and his inspirations. After the presentations, we sat down with them to gain further insight into their thoughts on Sørensen and art’s role in building sustainable peace.

The Radical Artist and Activist

Sørensen was a controversial and multifaceted figure, both as an artist and as an activist. He was praised and disliked for his strong involvement in social issues in a way that, according to Hoff, is not seen today. “It was exceptional. Perhaps it was a time where it was possible. Sørensen would pick up the phone and call a bishop or the Prime Minister. He scolded the occupational powers during the war. He even went to Germany to talk some sense into Hitler. Completely foolish – no doubt about that – but at the same time, this kind of engagement does not exist today" Hoff said.

The pacifist Sørensen would not only express his visions of a world in peace through actively addressing policy influencers and implementers, but moreover through his artwork. This made Sørensen an obvious choice when the Norwegian government decided to contribute to the decoration of the Palais des Nations in Geneva. In fact, it was Skard’s grandfather, Halvdan Koht, at the time Norway’s Minister of Foreign Affairs, who together with C.J. Hambro, President of the Parliament, gave Sørensen the task of creating the mural. The mural’s message is clear: sustainable peace can be achieved through multilateral efforts.

In the words of Skard: “It shows the fighting and despair, but also that you can climb up. It shows the suffering and the hope. The pyramid lifts you up. And then you can study the different people. I am so happy that back in 1939, he portrayed not just the white man, but people from different cultures, of different ages, of different genders. It gives a universal impression. It’s not just a small country – it’s about the universe. The UN, of course, is supposed to cover our whole world. The mural truly is worthy of the UN." 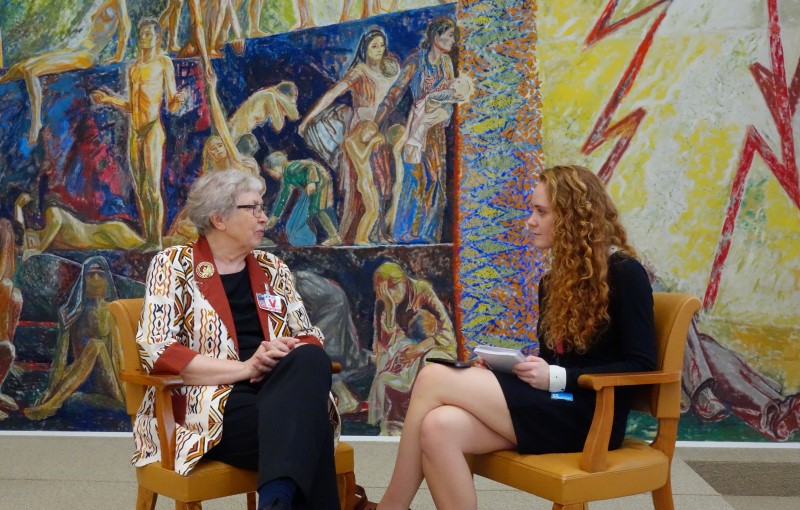 When Skard recently discovered that the giant mural was missing an accompanying plaque giving details of its title and origins, she contacted the Permanent Mission of Norway. In close collaboration with the UN Library it turned out that the cue for its real title had been on display in the Koht family home through Skard’s upbringing. Sørensen had given a draft painting, a detail, of ‘The Dream of Peace’ to Koht’s family. The painting depicted a man, suffering, yet full of hope.

As Skard was growing up, the painting became of sentimental value to her: “I would look at it, and it would give me strength. I thought ‘If he doesn’t give up, I can’t give up’." In addition to the personal value it had, the painting would also prove to contain a vital message about the mural displayed at the UN: “On the painting in my family home, Sørensen himself had written ‘to The Dream of Peace.’ So, in this way the mural’s name was clearly documented” Skard explained.

On the International Day of Peace 2018, the 56 square meters large mural was finally accompanied by a plaque, informing all future visitors of the painting’s name, its artist, and the fact that it was donated by the Norwegian government in 1939. 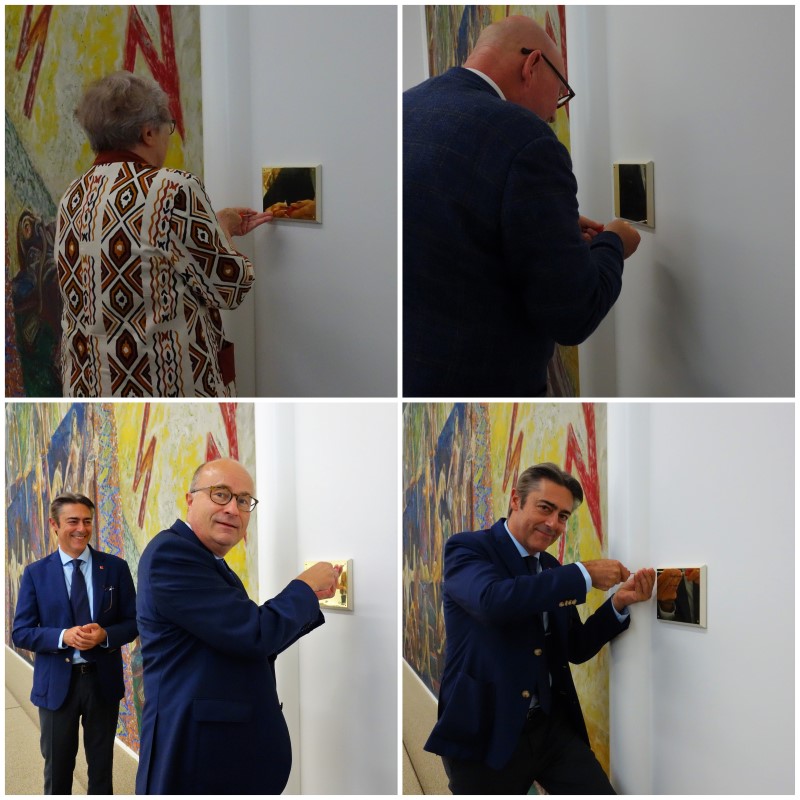 With a plaque now in place, the work, vision, and name of Sørensen will – hopefully – be remembered. “I think it’s wonderful that the Norwegian Mission and the United Nations Library did this. It gives a message to the UN system that this is part of Norwegian culture, that this is something that we are proud of, and that the cultural heritage must be preserved" said Hoff.

As noted by Brattskar in his remarks, “Sørensen has inspired a Norwegian engagement in peace diplomacy and conflict resolution, and Norway remains active in this area until this very day.” So, does a vision, like that of Sørensen, play a role in building sustainable peace? Skard believes so: “If we are going to save this Earth of ours and the human beings on it, we need the inspiration and determination of a person like Sørensen."

We invite all visitors to the UN Palais des Nations to visit the Events Hall in the Library and take in the magnificent view of ‘The Dream of Peace’ mural, and experience for yourself the message of hope through struggle, peace through joint efforts.