In the aftermath of the Second World War and at the onset of the Cold War, Lie sought to make his office a «source for peace».

The Early Years
Trygve Halvdan Lie was born in Oslo, then Kristiania, on July 16, 1896. His father cut his ties to the family when he migrated to America before Lie’s birth. Lie grew up with his mother Hulda and his older sister in a working class neighbourhood on the outskirts of the Norwegian capital. His mother ran a cafe and Lie used to read newspapers aloud for the workers. Lie had several local benefactors who supported him through school and university. He gained his law degree in 1919 and became a legal advisor for the Norwegian Federation of Trade Unions (LO) in 1922.

Lie got into politics at an early age and quickly rose through the ranks of the Labour Party. From 1935, Lie held several ministerial posts, among them Minister of Justice, Minister of Trade and Minister for Supply and Shipping. During the Second World War, while the Norwegian government was in exile in London, Lie was appointed Minister of Foreign Affairs, a post he held until 1946. During the war years he also acted as Prime Minister for a brief period.

Trygve Lie and the UN
"Those who gave their lives in order that we may be free, those who lost their homes, those who suffered, and still suffer, from the consequences of war have given us a sacred mandate: that is to build a firm foundation for the peace of the world.”
Trygve Lie, February 2, 1946

As the Second World War was drawing to a close, the members of the Allied forces met to form a successor to the ill-fated League of Nations. In April 1945, representatives from 50 nations – 242 delegates and 1444 officially accredited participants - gathered in San Fransisco for the United Nations Conference on International Organisation. The United Nations was born.

Foreign Minister Lie led the Norwegian delegation, and chaired the commission which drafted the Security Council provision of the UN Charter.

See photos and a short video report from the San Fransisco conference.

Just over six months later, Lie again headed another Norwegian delegation. This time to the first ever UN General Assembly, held in London. After narrowly losing a vote to make him President of the General Assembly, Trygve Lie was elected United Nations Secretary General on February1, 1946 and installed a day later.

Trygve Lie as UN Secretary General
“The one common undertaking and universal instrument of the great majority of the human race is the United Nations.”
Trygve Lie, July 20 1950

Lie arrived in New York in March 1946. The UN had not yet found a permanent home, so work started at the Waldorf Astoria Hotel in Manhattan. Lie proved himself as a pragmatic politician and dealmaker. Within a couple of weeks Lie had provided temporary offices and before year’s end the UN had secured a site for its future headquarters on Manhattan. This can, to a large extent, be seen as Lie’s personal achievement. Lie had gained the support of property tycoon John D. Rockefeller, who gave the UN a USD 8.5 million cheque to pay for the land site. The UN headquarters on Manhattan was completed in 1952. 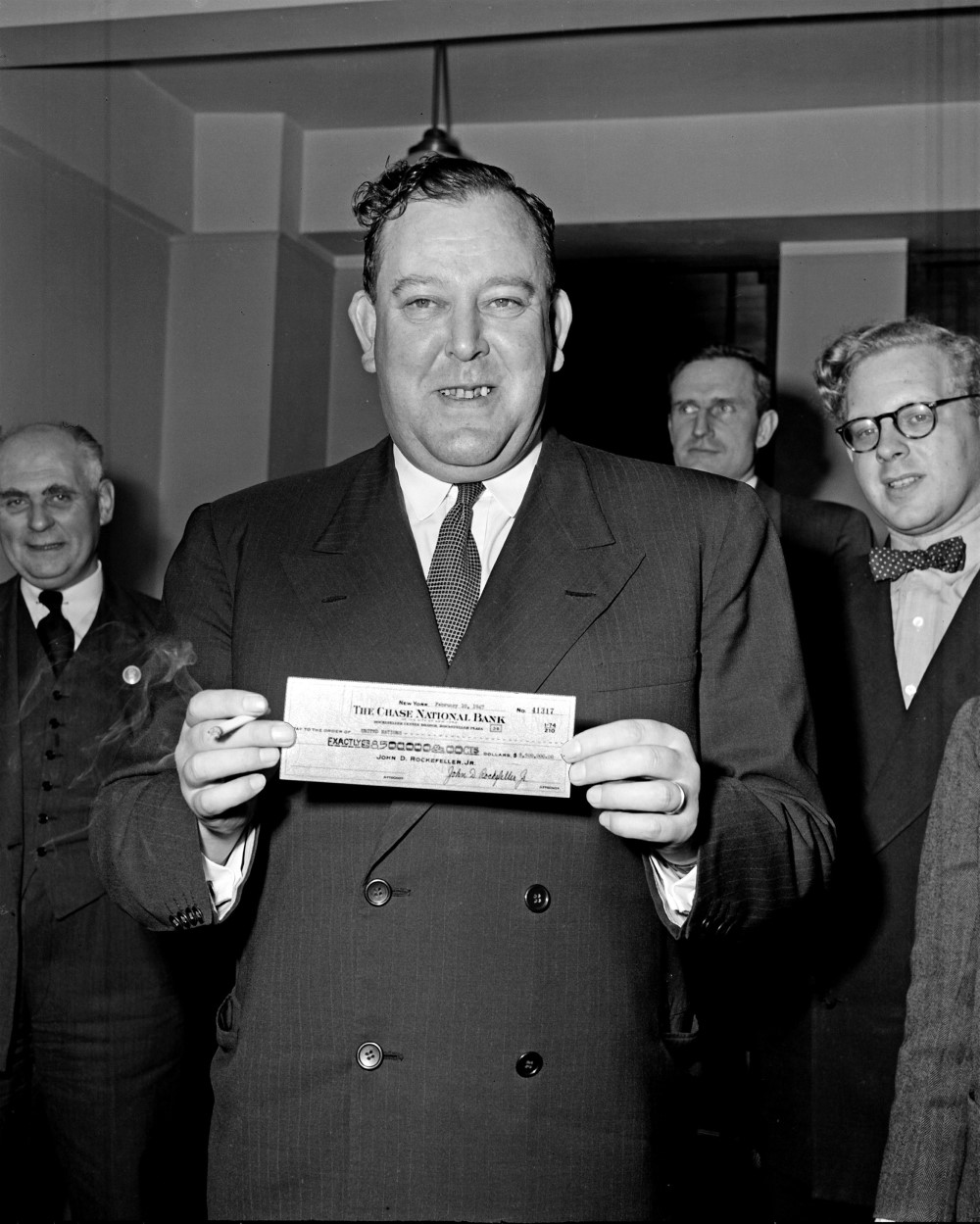 The advent of the Cold War influenced Lie’s period as Secretary General. His appointment of mostly American citizens to the new UN posts led to some labeling him as biased towards the United States. But Lie repeatedly demonstrated his independence. He developed the role of Secretary General into something more than an administrative post, and secured the right of the Secretary General to take political initiatives towards the UN Security Council.

Trygve Lie's vision for peace
"The world can never accept the thesis of despair -the thesis of irrevocable and irreconcilable conflict.”
Trygve Lie, July 20, 1950

In the first half of 1950, Lie presented his Twenty-Year Program for Achieving Peace Through the United Nations.

In the plan Lie proposed a new international machinery to control atomic energy and stall the arms race. He also proposed the establishment of a UN force to prevent or stop localized outbreaks of violence.

"I felt it my duty to suggest a fresh start to be made towards eventual peaceful solution of outstanding problems."

To gain support for his project, Lie met with presidents and premiers, ministers and diplomats in Washington, London, Paris and Moscow.

But Lie’s efforts were overtaken by events. The Korean War broke out in June 1950, only a few weeks after he began to circulate his vision for peace. The Secretary-General supported UN action against North Korea as the aggressor. This caused the Soviet Union to reject him as the UN Secretary General. In 1952 the US hunt for spies and communists in the UN headquarters took off. According to Lie, the combination of these events made his role as Secretary General untenable. In November 1952 he tendered his resignation.

In his last speech to the UN General Assembly on April 7, 1953, Trygve Lie called his seven years as Secretary-General the hardest and most challenging of his life. Despite what he called the “destructive forces that threaten our civilisation”, Lie remained hopeful, yet realistic about the UN's prospects;

“Our organisation reflects the imperfections of our time, but it is also an expression of the most constructive forces of our world and a symbol of hope for the future. ... I am no Utopian. I see in the UN a practical approach to peace and progress, not by any quick and easy formulas, but by wise, loyal and persistent use of its institutions by Member States over many years.”

Life after the UN
After seven years at helm of the UN, Lie had probably expected a prominent position when he returned to Norway. Rather, the first years gave him ample time to work on his memoirs at his family’s mountain cabin near Røros.

From the mid-fifties Lie got back into public life. In 1955 he was appointed county governor of Oslo and Akershus and approached the taks with his usual vitality, whether the issue was new bridges or motorways. In 1959-1960 he chaired a government-appointed commission to enhance foreign investment in Norway and could draw on his international network of contacts from his years at the UN.

In 1963, 67-year old Lie returned to government as Minister of Industry, but within the year he had to take a leave of absence due to a cerebral haemorrhage. He was back at his desk in January 1964, now as Minister of Trade and Shipping. He held this post until the Gerhardsen government resigned following the general election in the autumn of 1965.