This High Level Dialogue on Combating Marine Litter and Micro plastics formed part of the preparations towards the fourth UN Environment Assembly, which will take place in Nairobi from 11-15 March 2019.

Ambassador Hans Brattskar presented the rationale for Norway’s proposed resolution on strengthening global governance on marine plastic litter and micro plastics. “Plastic litter travelling by ocean currents knows no borders, and is now found in the most remote places on the planet,” he said. “It is a truly global problem that calls for stronger international cooperation.”

Chargé d'affaires at the Permanent Mission of the Gabonese Republic, Edwige Koumby Missambo, shared Gabon’s concern for the growing problem of marine litter and their ambitions to recycle 50% of all waste by 2020. We need a global framework to support nation states in their efforts, she said.

Deputy Permanent Representative of France, François Gave, emphasised, concerns on the effect marine litter has on marine wildlife, food security and national economies. He highlighted a number of French initiatives to combat marine litter, including France ambition to recycle all plastic by 2025.

Kei Ohno-Woodwall, Programme Officer, Basel, Rotterdam and Stockholm Conventions, emphasised the importance of updating the existing conventions to the new and complex context we face today.

Inger Andersen, Head of the International Union for Conservation of Nature (IUCN), echoed that the issue of micro plastic is a massive problem that requires an urgent and global response. Norway’s proposed resolution will facilitate a needed discussion on governance structures, she said. Unless we deal with preventions, regulative measures and a circular economy, we will not reach our goals.

Brenden Edgerton, Director, Circular Economy, WBCSD, said that plastic production is expected to double in the next 15 years. He presented the Alliance to end plastic waste, a private sector, 1.5 billion USD initiative to keeping plastic waste out of the environment. The initiative is based on a four-part strategy to catalyse investment in waste management infrastructure, innovate new materials and designs, engage actors and develop solutions to clean the environment.

In the round of discussions, Switzerland highlighted that landlocked countries have a role to play as well, as the problem of marine litter starts on land and on good waste management. 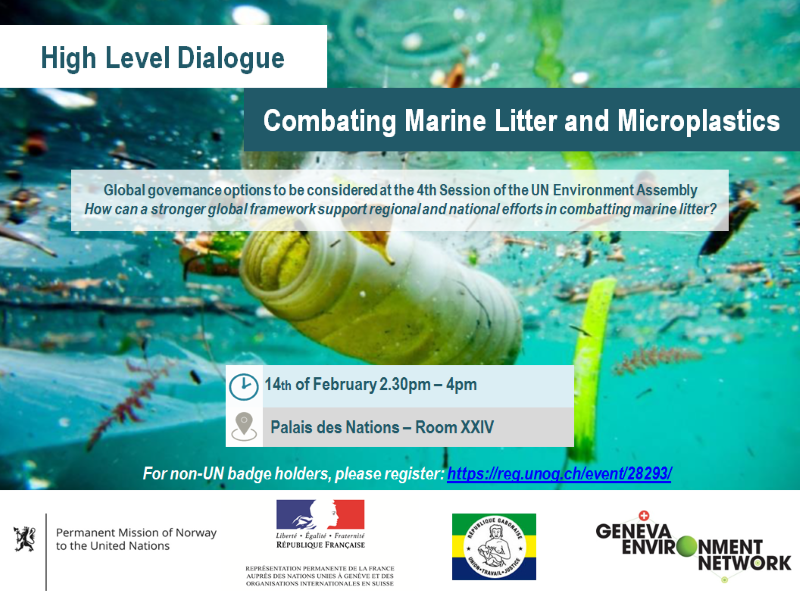 Full statement of Ambassador Brattskar, Permanent Representative of Norway, below:

Norway is very pleased to be hosting this panel debate together with Gabon, France and the Geneva Environment Network. We have invited you here today as part of the preparations towards the fourth UN Environment Assembly which will take place in Nairobi in March.

Pollution of the oceans by marine litter and microplastics is one of the fastest growing environmental concerns of our time. Plastic litter travelling by ocean currents knows no borders, and is now found in the most remote places on the planet.

It is a truly global problem that calls for stronger international cooperation.

The world`s environmental ministers have met three times at the UN Environment Assembly since 2014. Each time they have agreed to comprehensive resolutions on marine litter and microplastics.

These resolutions have established a good basis for future work. The resolutions demonstrate broad international consensus on the nature of the problem, and our collective ambition.

At UNEA-3 in 2017, the world agreed that the long-term goal must be to stop plastic waste from entering the oceans.

There is a broad agreement on the need for immediate action. There is also a growing understanding for the need for stronger governance structures at the global level.

The resolutions further point to the need to exploit the potentials of relevant existing international agreements within their mandates, and the importance of cooperation between governments and other key stakeholders such as industry, NGOs, consumers and experts.

The UNEA-resolutions underline that preventive measures targeting land-based sources of microplastic pollution and plastic litter are most important for lasting improvement.

At the fourth UN Environment Assembly in March, we need to take this agenda a significant step further.

That is why Norway has put forward a proposal on a resolution on marine litter and microplastics.

First, a proposal to start work under the auspices of UN Environment, on important "building blocks" for a stronger governance response. We propose: Improved scientific data collection and development of methodologies, stronger technical and other support by UN Environment to enable governments to improve on their national policies and measures, and the development of a mechanism that enables the international community to take stock of the sum of actions taken and to decide on further action.

The other main element of our proposal is to establish a working group with the aim to prepare recommendations for a new dedicated global structure to combat marine litter, for consideration by UNEA-5 in 2021. Norway proposes that the work plan for the group should include considerations on a legally binding treaty. The main purpose of a stronger governance framework would be to support governments in their efforts to strengthen their national policies and measures to reduce land-based sources to releases of marine plastic litter and micro plastics, and to conduct effective clean-up operations as needed.

A dedicated framework should mobilise and prioritise financial resources and capacity building.  A new framework must also clarify the division of roles and responsibilities between a new structure and existing instruments and organisations. This will be an important issue for the working group.

Norway is of the opinion that UN Environment must continue to take the lead in organising the international work towards a stronger governance structure in this area.

There is a proliferation of initiatives, actors and platforms emerging to combat marine litter. This is in itself good news. However, it also demonstrates a dire need for closer coordination.

UN Environment is mandated to "keep under review the world environmental situation in order to ensure that emerging environmental problems with international significance receive appropriate and adequate consideration by Governments".

Further, UN Environment has universal membership and is therefore uniquely suited to be responsible for the further development of an international governance structure to combat marine litter.

We are looking forward to a fruitful discussion here in Geneva on how a new global structure will be beneficial for countries and other stakeholders in our joint efforts to combat marine litter and micro plastics.