On the occasion of the International Day of forests, 21 February, the United Nations Programme on Reducing Emissions from Deforestation and Forest Degradation (UNREDD) and the Food and Agriculture Organization of the United Nations (FAO) hosted a discussion on why the forests are so important, and how we can best protect and restore them.

Director of FAO Geneva, Carolyn Rodrigues-Birkett, gave a comprehensive overview of the role of forests in climate change efforts as well as local and international economies.

Ambassador Hans Brattskar presented the Norwegian International Climate and Forest Initiative (NICFI). This initiative was launched in 2007 and aims to help save the world's tropical forests, while improving the livelihoods of millions of people who live off, in, and near the forests. Through this initiative, Norway has supported efforts to reduce deforestation in more than 70 countries. The initiative is comprehensive, including supporting forest countries directly, but also global and regional initiatives like the Central African Forest Initiative, the work behind the New York Declaration on Forests and the Interfaith Rainforest Initiative. The NICFI initiative has been extended through to 2030.

Acting Permanent Representative of Pakistan, Tahir Hussain Andrabi, presented Pakistan’s 'One Billion Tree Tsunami' that aims to plant one billion trees in Pakistan over the next five years. The first day of tree planting took place during the monsoon last year, and saw 1 million trees planted. He emphasized the important role trees play in cities, and that urban forests is an important component of this initiative.

Deputy Permanent Representative of Indonesia, Andreano Erwin, shared Indonesia’s efforts to protect its forest. He explained that fire management is one of the country’s most challenging aspects of forest protection. The World Bank estimated that in 2015 forest fires cost Indonesia 1.9 percent of its GDP. He also emphasized the role local population’s play in protecting forests. Indonesia has developed a strategy called social forestry that aims to increase the cohort of Indonesian forest utilized by the local population from 7% in 2015 to 35% in 2025.

Roman Michalak, Economic Affairs Officer at UNECE, rounded up the panel by presenting UNECEs work on forestry education. He underlined the need to have a more people centered approach for forest protection and that the variation of job opportunities in forestry has increased significantly over the last two decades.

Moderator Mario Boccucci, Head of the UN-REDD Programme Secretariat, concluded by inspiring further actions, saying that “awareness on the need for forest action has never been greater, nor the ability to deliver transformative change”.

Also part of the celebration was a group of young students from the Institut International de Lancy. They had participated in a writing and drawing competition about the role and love of forests. They touched participants’ with their strong messages and bore witness to young persons’ commitment to protecting our forests.

Please see the links belov from the initiatives mentioned in the text: 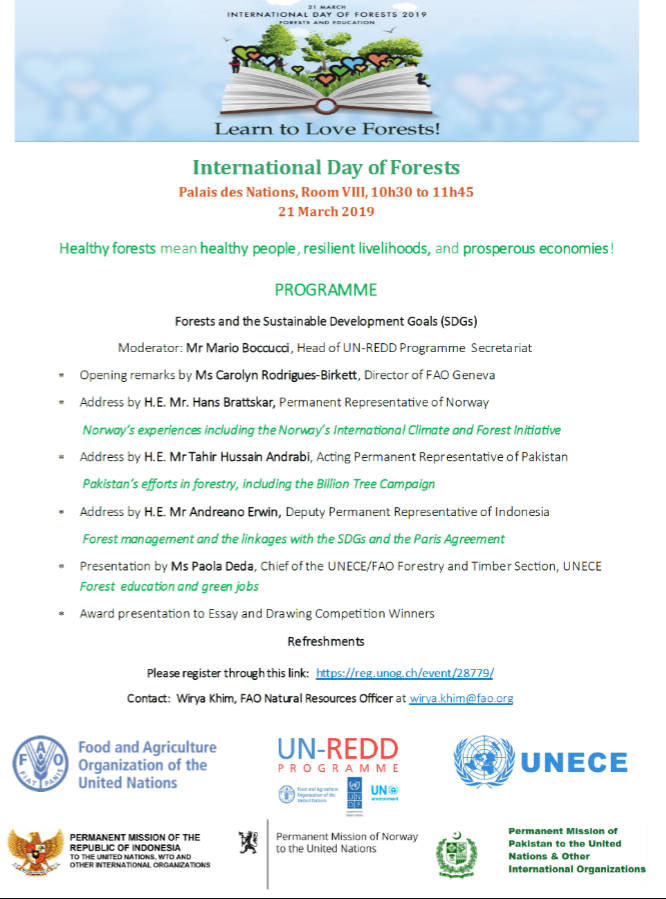