Greetings from the Consul General:

December is here. This is an important month for many Norwegians. It is the month of Advent – which basically means that we are waiting for Christmas to come. It is a time for family and traditions. It is also a time for reflections. Unfortunately, the pandemic still affects our lives and restricts our movements. That is challenging when you live abroad like we do. Some of us are fortunate to be able to go home to Norway for Christmas, while many of us will stay in China. I hope that either way, everyone will get a taste of Christmas, wherever you are.

2021 has been yet another active year for the Consulate. We have organized several events together with the Norwegian business community. Not only in Shanghai but also in our neighboring provinces – often together with other Team Norway partners. We had a great 17th of May celebration – and let me use this opportunity to thank Klubb Norge for organizing this and other events for the Community.

Having an active club like this is very valuable for a small community as Norway! The Consulate has promoted Norwegian culture and lifestyle and we have supported and strengthened our cooperation with Chinese universities and institutes. One of my wishes for the new year is that we again can welcome Norwegian students to China. They play an important role in bridging the Norwegian and Chinese societies.

Me and my colleagues at the Consulate would like to use this opportunity to thank all of you for a great cooperation in 2021. We wish you a Merry Christmas and a Happy New Year. We look forward to seeing you in 2022.

New changes to apply upon entry to Norway
From 26 November, Norway will lift all Covid 19-related travel restrictions. All foreigners who have the right to enter Norway under the Immigration Act may now enter the country.

However, as a result of developments in the infection rate, the Norwegian Government has decided to reintroduce the requirement to produce a negative test taken before arrival and expand the current requirements regarding testing and entry registration in connection with arrival in Norway.

The new measures are applicable from 26 November. More details about the main changes to the entry restrictions can be found here. 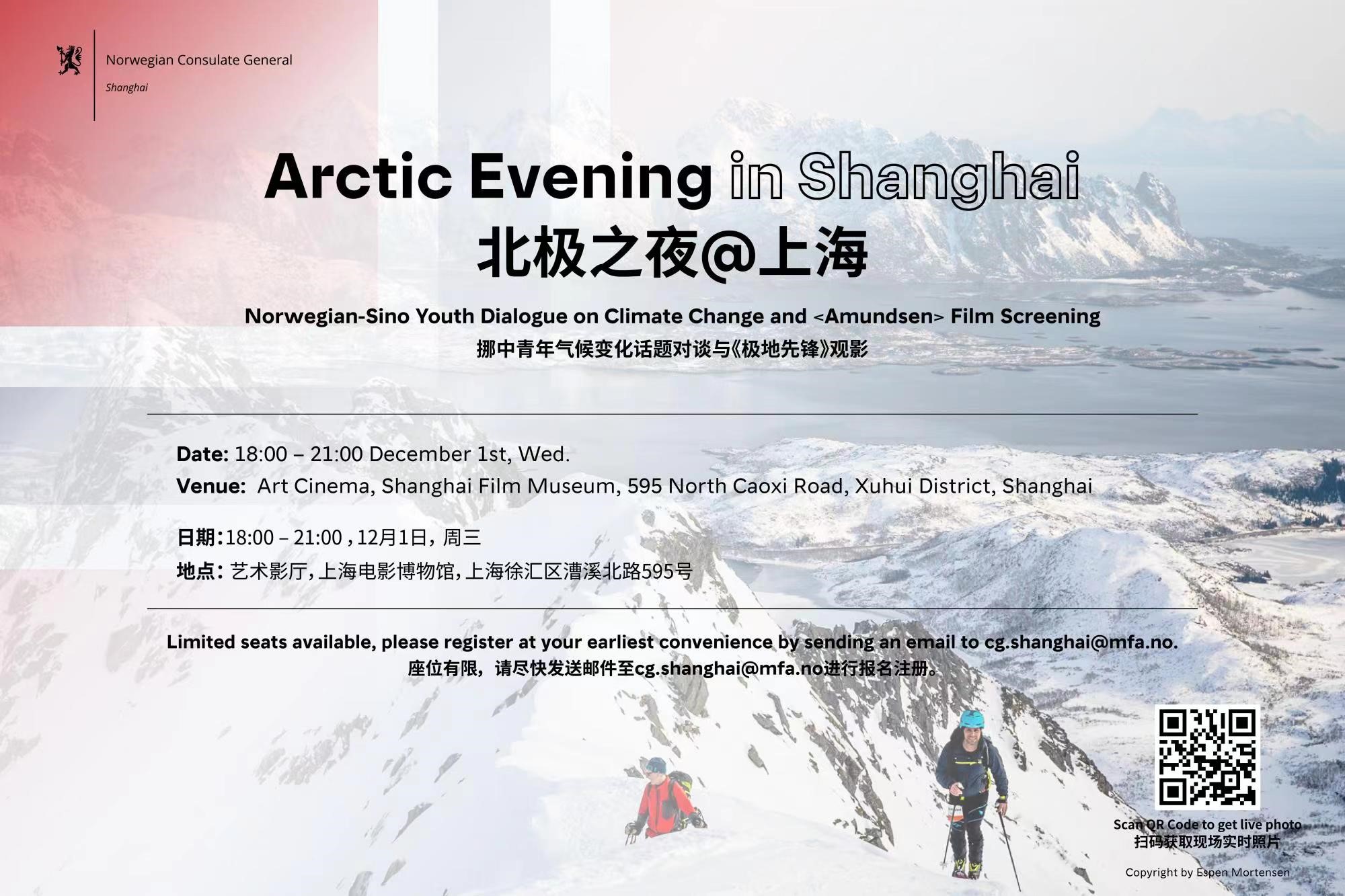 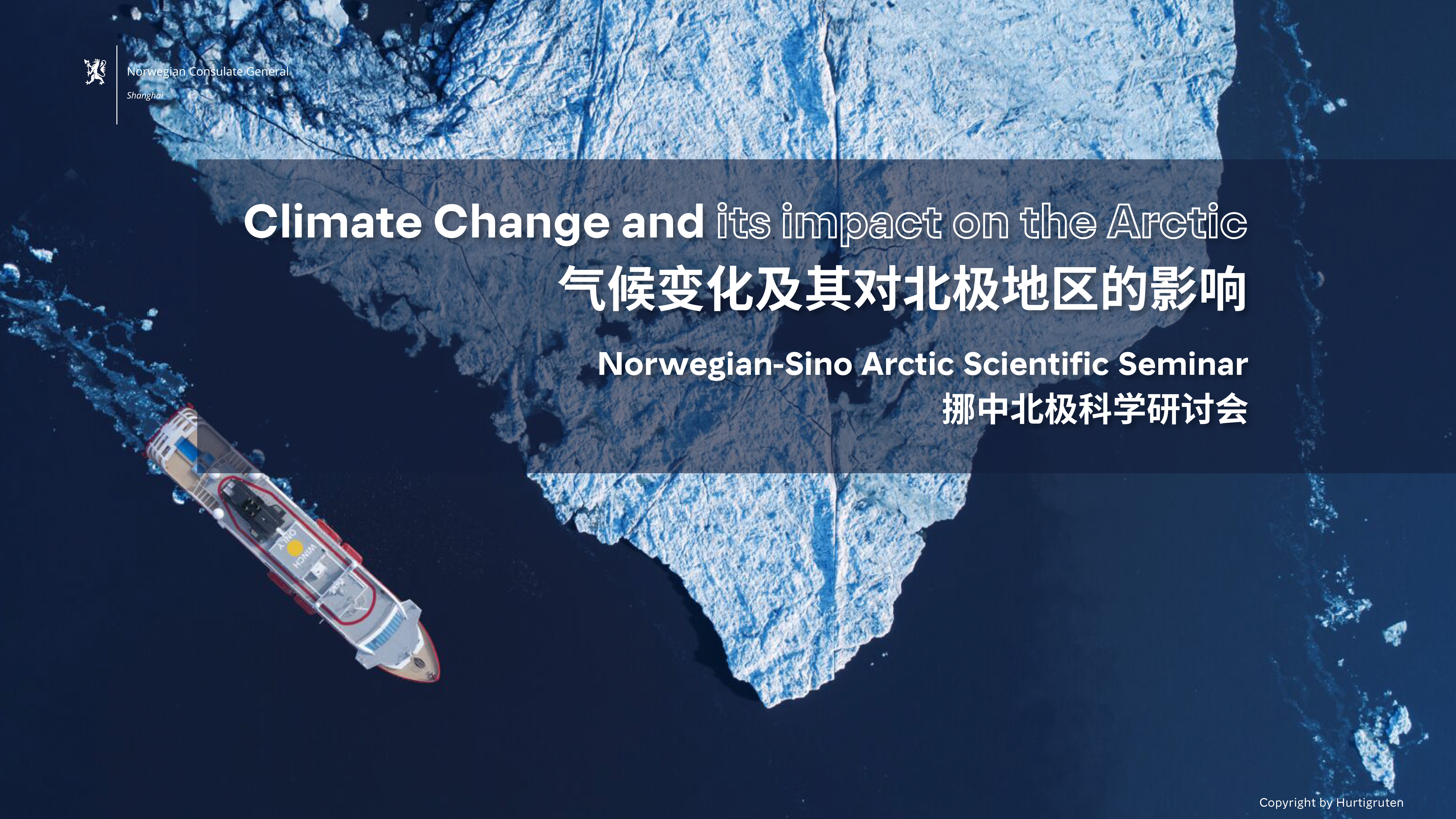 The Consulate invites to Arctic Evening and Amundsen film screening 1 December at Shanghai Film Museum. There are still some seats available. Registration can be done by sending an email to cg.shanghai@mfa.no.

The evening will be followed up with a Norwegian-Sino Youth Dialogue on Climate Change the next day, 2 December. You can follow the dialogue by scanning above QR code.

Marintec 2021 has been postponed. New dates are: 28 June to 1 July. Regardless, the Consulate, supported by Innovation Norway and the Norwegian Business Association, will host a reception for the maritime sector 6 December. The event gives the Norwegian maritime companies, their clients and customers an arena to meet and network in Shanghai. Note by invitation only. To raise awareness and knowledge about upcoming World Aids Day 1 December, the Consulate is arranging #2021WorldAidsDay digital campaign on Weibo. The campaign lasts from 25 November to 1 December and is supported by UN Resident Coordinator Office in China and UNAIDS China Office. To interact with us, follow our Weibo account (@挪威驻上海总领事馆) where you can answer a series of questions posted each day of the campaign.

A lucky draw will be made after the campaign, where you can win two tickets to the annual Red Ribbon Gala in Shanghai. Due to the pandemic, the event has been postponed from December to next year. The new date will be confirmed later. The Beijing Olympics is approaching fast. The games start in Beijing 4-20 February followed by the Paralympic Games 4-13 March. To warm up to this important event, the Consulate is organizing a Games for All-charity event in Changshu, Jiangsu province. Due to the current pandemic situation, we have changed the time of the event from December to Saturday 15 January 2022. Games for All 2022 will share the Olympic and Paralympic sprits of diversity, inclusiveness and solidarity. Exciting competitions and activities will give you a day full of fun, where the most important thing is not to win but to take part. The event is organized together with United World College in Changshu and supported by Team Norway. We hope that all Norwegians and their families, friends and colleagues will join us.

Registration link will open in early December, so stay tuned! For any questions about the event, you may contact: cg.shanghai@mfa.no

The new date of the 12th Edition of The Norwegian Seafood Dinner in Shanghai, organized by NBA China and supported by The Consulate, is 25 February 2022. CIIE is maybe the most important expo in China. Several Norwegian companies participated, and the Consulate had put together a Team Norway-delegation that visited the Expo and the Norwegian stands on 6 November. A range of industries from Norway- from ergonomic schoolbags to agriculture, from biotech and nutrition, to e-commerce platforms was represented.

We also invited participating companies and their Chinese partners to a reception on 5 November.
More than 120 guests gathered at Hotel Indigo Shanghai on the Bund. As last year, we organized a press conference for Chinese media in order to promote Norwegian businesses and to highlight the importance of CIIE from the Norwegian Government, State Secretary Jannicke Andreassen from the Norwegian Ministry of Trade, Industry and Fisheries, joined online from Norway.

For more photos, check out our LinkedIn and Instagram accounts.


Night of MUNCH – a celebration of Norway’s new museum 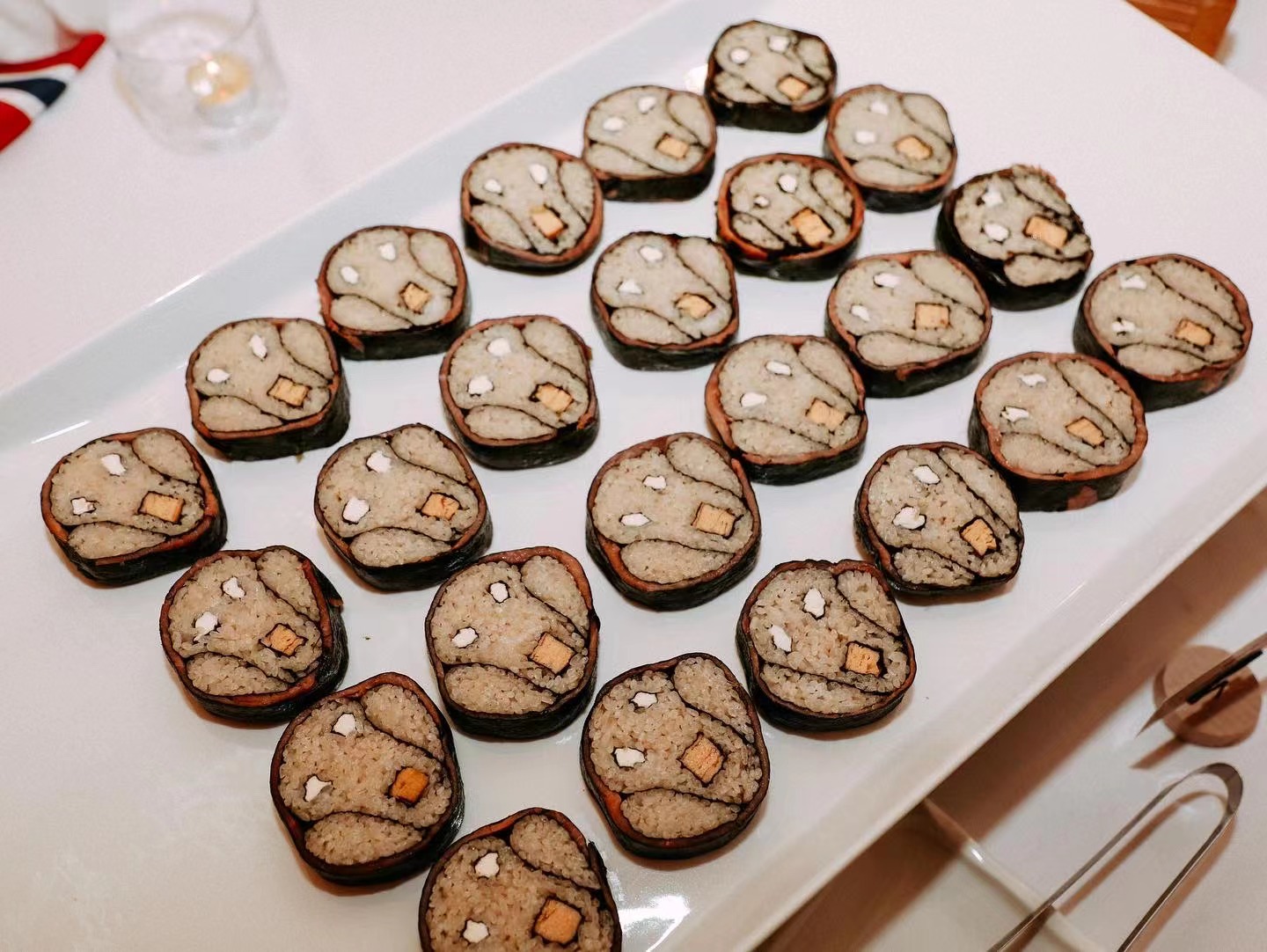 16 November the Consulate hosted Night of MUNCH, a celebration of Norway’s new museum MUNCH in Oslo. The event took place in the Consul General’s residence. More than 40 guests attended;  museum representatives and art critics, media, in addition to  Norwegian companies in Shanghai.

Vibrant videos from Oslo gave the guests a unique tour into MUNCH – from the hard work behind the museum, to the fantastic opening ceremony on Edvard Munchs Plass 1. An exciting site tour showed what MUNCH’s 13 pulsating floors now have to offer, while museum director Stein Olav Henrichsen invited everyone to visit Oslo and MUNCH, when the world opens up again. 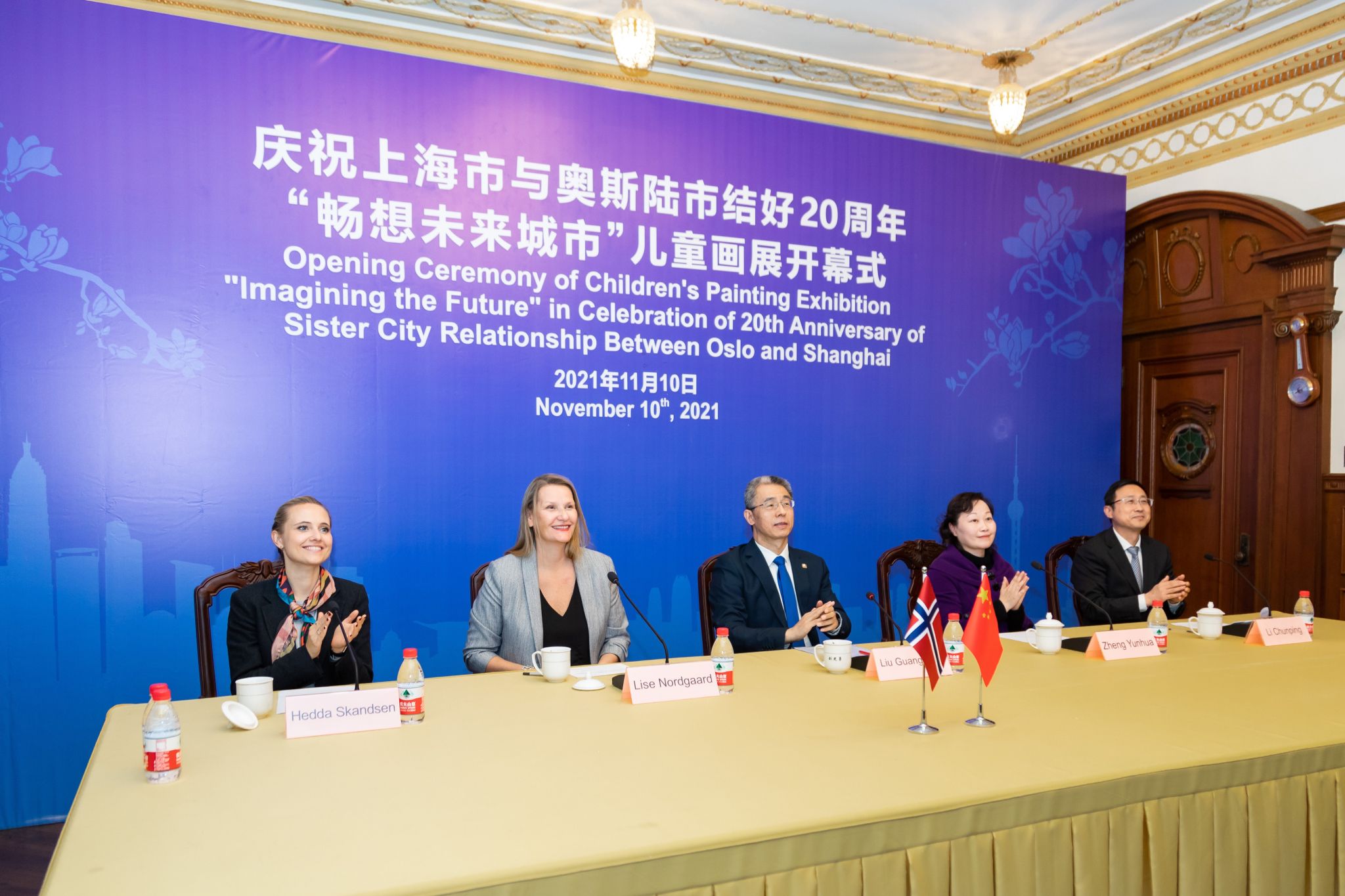 2021 marks the 20th anniversary of the sister city relationship between Oslo and Shanghai. 10 November the Consulate attended the offline opening ceremony of the children’s painting exhibition “Imagining the Future”, together with Foreign Affairs Office of Shanghai Municipal People's Government. Ms. Rina Mariann Hansen, Vice Mayor of the City of Oslo and Ms. Angela Goldin, the director of The International Museum of Children’s Art joined the celebration online.

The children’s art exhibition is realized in collaboration between Oslo Municipality / Office of the Governing Mayor, The Chinese Welfare Association Children’s Palace in Shanghai, the Norwegian Consulate General in Shanghai and The International Museum of Children’s Art in Oslo.

30 children’s paintings from each city will be exhibited in both cities. By scanning the QR code in this link, you can access the online exhibition through mobile phone. 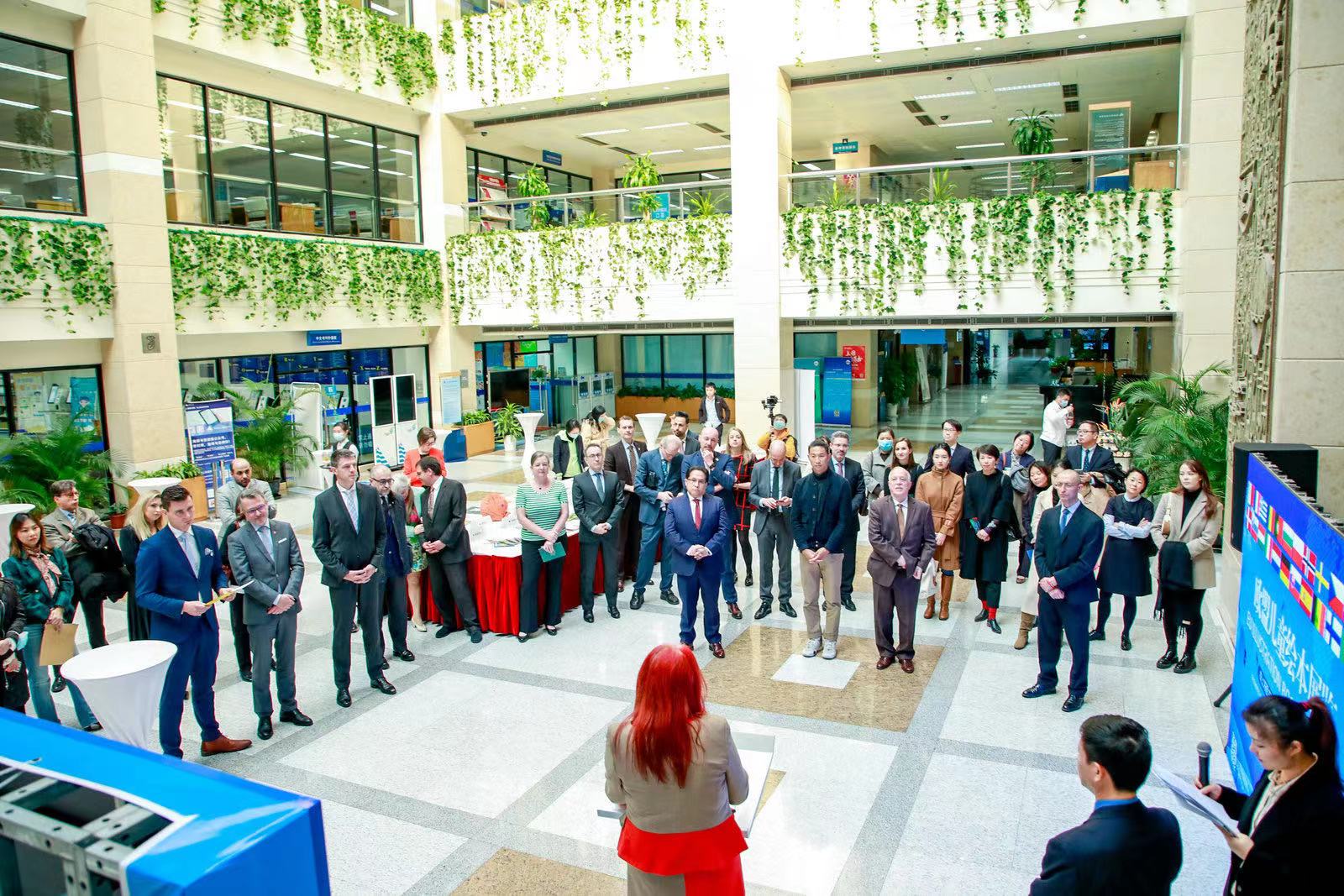 The Consulate joined the EU Illustration Books Exhibition in Shanghai, which opened 19 November at Shanghai Library. Together with 22 EU and non-EU Consulates in Shanghai, 117 books were presented to book lovers of all ages. 94 books were published in Chinese and 18 of other languages. Norway contributed with the books “Så Rart” (Inger Hagerup), “Ballongjegeren” (Anniken Bjørnes and Mari Kanstad Johnsen) and “Alle Sammen Teller” (Kristin Roskifte). The China Children Book Fair in Shanghai which was supposed to take place in November, has been postponed to March 2022 due to the  pandemic. 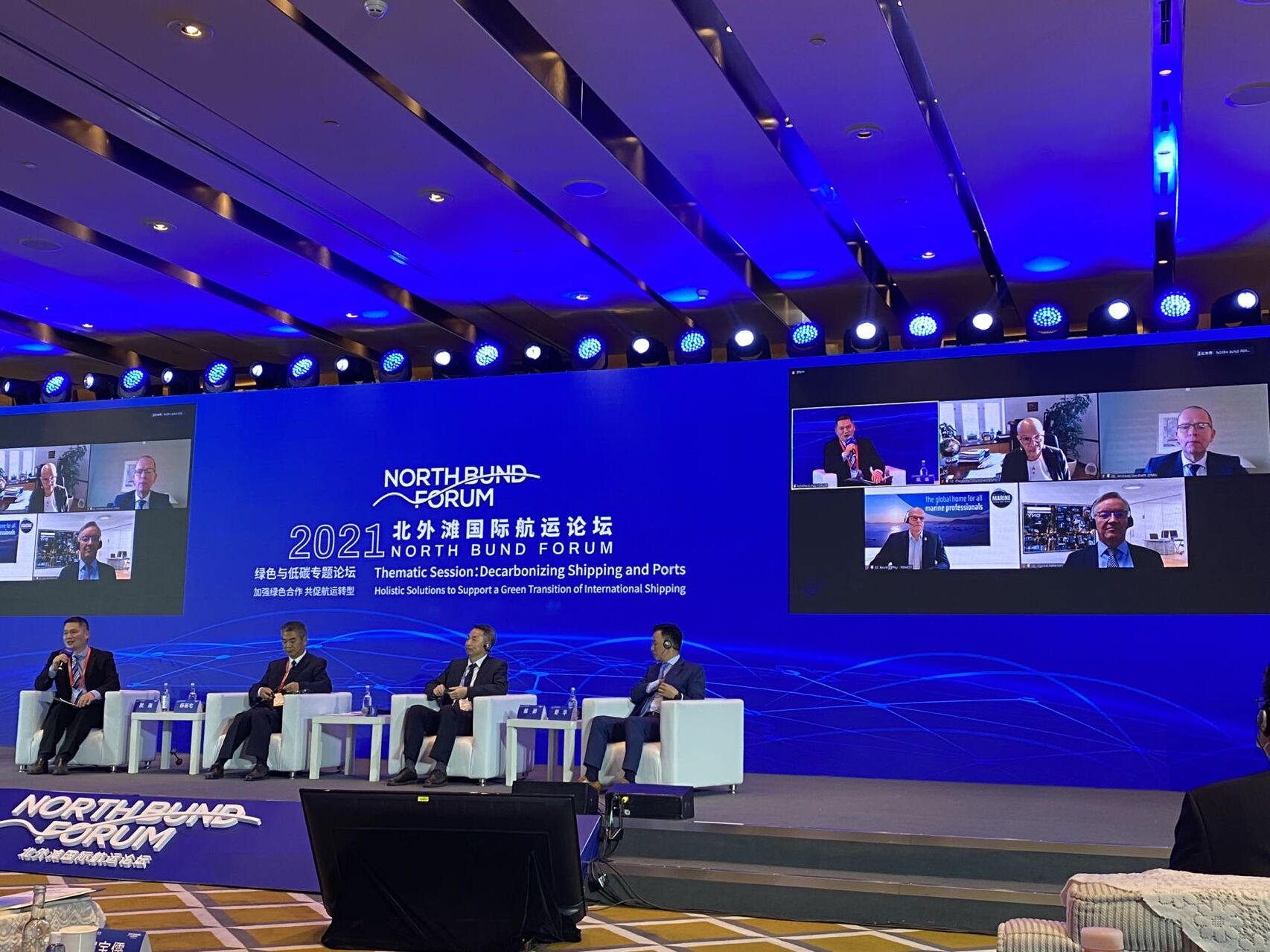 The Consulate  attended the opening ceremony of NorthBundForum 4 November. The Forum is co-hosted by Shanghai Municipal People's Government and the Ministry of Transport of China, in a bid to enhance sustainable development of the international shipping industry. Sveinung Oftedal, Specialist Director from the Norwegian Ministry of Climate and Environment and Øyvind Pettersen, Head of DNV Technical Centre in China joined online from Norway. 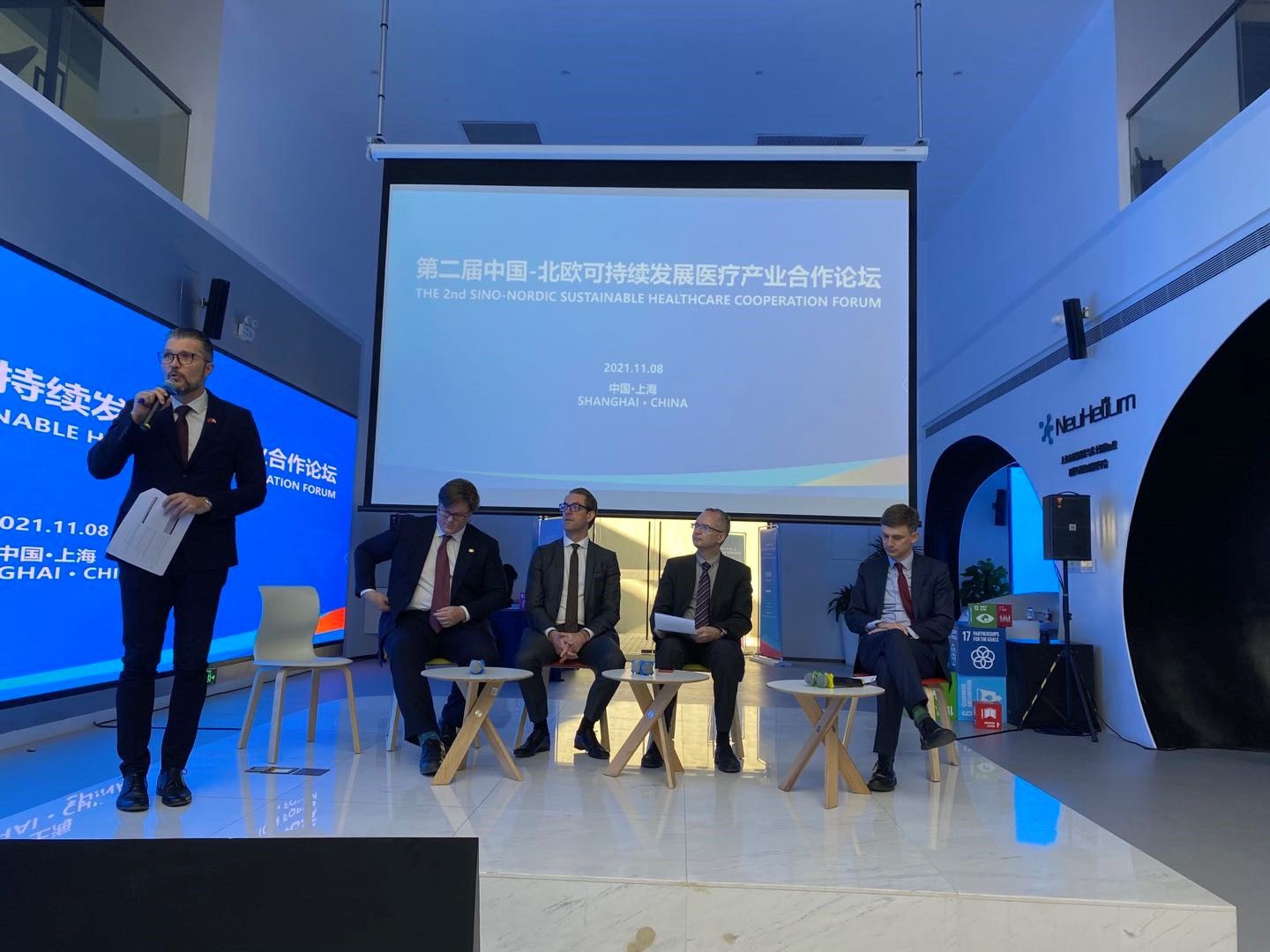 The 2nd Sino-Nordic Sustainable Healthcare Cooperation Forum was held on 8 November at the Changyang Campus in Yangpu, Shanghai, in collaboration between Finland, Sweden, Denmark, Iceland and Norway.

A Nordic Healthy Cities Round Table on hot health topics such as anti-discrimination of disabled people and the inclusiveness in Nordic societies, and how this can play a role towards inclusive sustainable development goals was part of the agenda. Eight Nordic companies also presented their sustainable healthcare solutions.